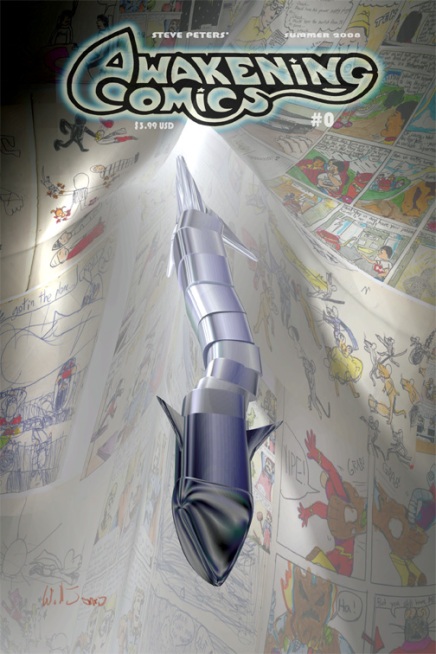 Awakening Comics #0 is a precursor to Steve Peters’ Xeric Award-winning series, Awakening Comics.  It covers its creator’s entire artistic life, from birth to the time period in which the first issue came out in 1997.  It is a prequel issue that sets up the events of Awakening Comics and casts them in a new light.

The main story line of Awakening Comics #0, like most issues of Awakening Comics, deals with a cosmic crisis and time travel.  “I got the germ of the idea from the British T.V. series Doctor Who”, says Peters.  “The Doctor is a Time Lord who occasionally has to “regenerate”, which allows the character to be played by different actors.  There was an episode called ‘The Five Doctors’—a time travel story that brought together the various actors who played the Doctor  in the same episode”.

“So my idea was to do a story about ‘the four Steves’—my childhood self, my teenage self, my young adult self, all being guided by my old self from the distant future.”  All of these selves meet together on the Starship Paradox, which made its debut in 2007’s Runner’s Paradox comic.  “As the selves from each time period is featured in turn, we get glimpses of the comics he was creating during his time”.

Peters originally executed this idea as a 24-hour comic.  As he drew it on 24-Hour Comic Day, a national event, he knew that he would eventually go back into the story and add artwork from the various time periods.  Once added, these inserts rounded out the page count from 24 to 32.  One of the inserted pages originally appeared in Cerebus #146—Steve Peters’ first published page in a comic book.

The comic also includes an 8-page Rabbit Hell story, which, like the main feature, adds a back story to the Rabbit Hell tale featured in the original Awakening Comics series.  It includes jam art by a number of well-known comic creators, pulled from the vaults of the Awakening archives.  Many of these jams are 15 years old and are being published for the first time.

“They were originally done for an epic story that I ended up abandoning”, explains Peters.  “It dealt with a” (you guessed it) “cosmic crisis in which a hole in the fabric of space/time begins to suck characters in from other realities”.  The logistics of putting that jam piece together ended up being too much of a headache, though Peters did eventually present a different version of it in Awakening Comics #3: The Everwinds Awakening War, using all the characters from both his series Everwinds and the various Awakening realities instead of those created by other artists.

“I was going through some old artwork and came across these old unused jams, and started thinking about a way I could finally use them.  Eventually I realized they would fit perfectly into the prequel issue.  Since the basic storyline was used in Awakening Comics #3, I turned the jams into a dream sequence that would foreshadow that issue”.  The jam art includes beautiful contributions from Sergio Aragones, Stan Sakai, Paul Chadwick, Gahan Wilson, Evan Dorkin, Greg Hyland, Steve Remen, Mark Bode, Jim Lawson, and David Chelsea.

To cap things off, the back cover features a previously unpublished full-color jam with Joe Matt from 1997.
Awakening Comics #0 is a B&W 40 page book.  All proceeds from the sale of this comic go to Philabundance, the Greater Philadelphia Food Bank.
Published by Awakening Comics.  Art and story by Steve Peters and various artists.
$3.99 US, released on August 8, 2008.